When I had the idea to use a slide projector for this project, I assumed that getting slides made was a similar process to getting digital prints made. I wanted to get digital photos made into standard 35mm slides. I soon realised that this is not a trivial thing to do. After going through many google searches and sending out a few emails, I could not find any shops in Australia that offer this service. Most of my searches ended up with places that will convert slides to digital, in my emails although (I think) I clearly stated what I wanted, most of them often me the reverse service (slides -> digital). There are still places in Australia that will take special slide film and develop it into slides. So one option would have been to buy some of this film, borrow / buy a film camera (I don't have one!), take photos of a printout or the screen and get them developed. It didn't sound like a great idea.

Eventually, I found some online services in the USA that will do this and ship to Australia for a reasonable price. After comparing many options on this web site, I went with Gammatech. They arrive quickly and they look great! Below is one of the slides (using the computer monitor while writing this article as the back-light). 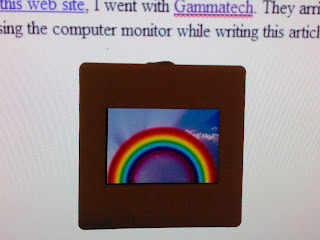