A key feature of my proposal was to project a rainbow on the wall when there is a high probability of seeing a rainbow. I chose to do this using a slide projector for two reasons - it seemed like a cool idea, and slide projectors can be found second-hand cheaply (as opposed to data projectors).

In my proposal, I estimated $20 for a slide projector after a quick look on ebay. After I was accepted, I started in earnest watching and bidding on slide projectors. I was surprised that many of them were going for much more than $20 (some up to $80-$150). The main requirement that I had was that it had some sort of remote control that I could replace with relays controlled by the arduino  / ADK.

Perseverance is usually necessary in these things, and I eventually did win one auction for $20 for a Kodak Carousel S-AU 28 slide projector, which I picked up from Gladesville (from a street with a beautiful view over the river!) The auction included the slide projector, several carousels, and a spare globe. The generous seller also gave me a projection screen to go along with it. 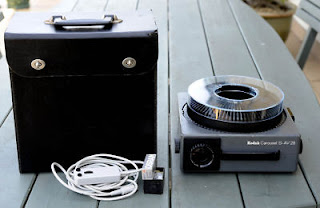 It was made in Germany, weighs a tonne but seems very solid (and works fine). I could not find a date of manufacture, however the Kodak slide projector history website says it was "supplied" from 1971-1974 and the list price was 240 pounds in 1971! Kodak still have a manual for it up on their web site. The same site announces also that Kodak stopped making slide projectors in 2004.

There is a 6 pin round DIN plug for the remote, as well as a weird 12 pin (2 parallel lines of 6 pins, never seen something like it) on the side which according to the manual allows "projector change-over and other control units to be linked to the projector". I'm guessing this could be a good way of switching the projector on and off (rather than using a relay on the 240V power in), whereas the 6 pin DIN will do the forward / back (this is what the supplied remote plugged in there does).
Posted by Jason Friedman at 12:15 AM